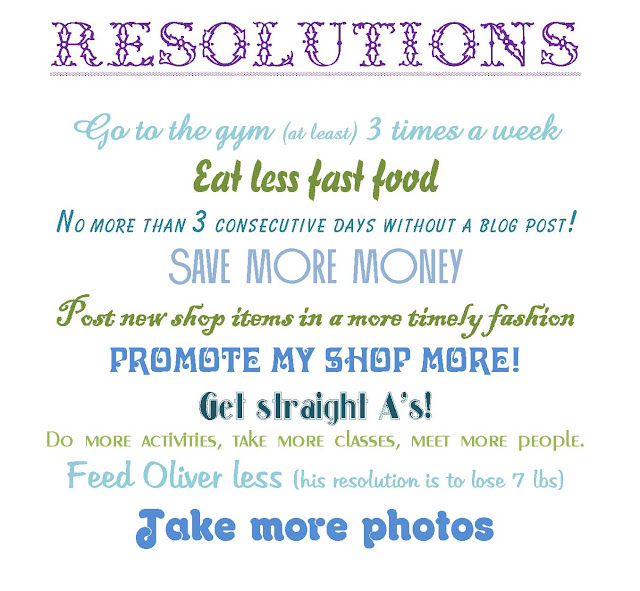 These are my goals for 2010. They're all important, otherwise they wouldn't have made the list, but some are more important than others. I need to be healthier and stronger and to encourage that in others (like Oliver).
I also need to do more things for me and a lot of these go along with that idea. I spend a lot of time trying to make sure everyone else's lives are running smoothly and I think I will happier and healthier person if I allow myself to do things I enjoy more often.
2009 Recap
In my livejournal every year, I do a recap on 12/31, and this year, I thought I'd post it here.
1. Where did you begin 2009? Babysitting in Hermosa Beach; Adam was there and we were able to see the beach fireworks from the balcony.


3. Did you keep your new years' resolutions, and will you make more for next year? I didn't make any last year, but as you can see, I made some for next year!


5. Did anyone close to you give birth? Yes! Toni, Megan and Christine all had baby boys!


6. Any new additions to your family? No.


8. Did you know anybody who got married? No, but Lindsay &Kyle and Hammad & Saba got engaged.


9. What countries did you visit? No new countries, but I visited new Hawaiian islands!


10. How did you earn your money? Working for the man, i.e. my dad. Also, babysitting. I would say through my etsy shop, but I don't think I make a profit.


12. Did you have any encounters with the police? Nope.


15. What was your biggest achievement of the year? Learning to think before I speak.


16. What was your biggest failure? My fighting with Jon.

17. Did you suffer illness or injury? Other than some sniffles, nope.
18. Where did you go on holidays/vacation? I went to Hawaii in April, Ojai, CA in June and Julian, CA in November.
19. What was the best thing you bought? I think I bought my blackberry curve this year, so definitely that.
20. Whose behavior merited celebration? Oliver.
21. Whose behavior made you appalled and depressed? Erica, my dad, Jonathan.
22. What did you get really, really, really excited about? Card-making, my first craft fair, etsy, going on weekend trips.
23. Did you move anywhere? Nope.
24. Where do you live now? With Jonathan and Oliver in a condo.
25. What song will always remind you of 2009? Help I'm Alive

by Metric.
26. Compared to this time last year, are you:
A. Happier or sadder? This is hard. I think the truth is sadder, but that comes from being more aware, which will probably lead to a truer happiness.
B. Thinner or fatter? Definitely not thinner.
C. Richer or poorer? Poorer.
27. What do you wish you'd done more of? Gymming, traveling. Doing things that I like to do.
28. What do you wish you'd done less of? Trying to control everything, worrying about other people, doing what other people want.
29. How will you be spending Christmas? Christmas is done. Spent it with family and friends.
30. What do you want for Christmas? I wanted a fancy watch and a fancy pillow and an e-reader. Go here to see what I got!
31. Where are you spending New Year's? and with who? Dinner with the boyfriend, then beachy fireworks.
32. Did you fall in love in 2009? I stayed in love. Can't say that happens every year.
33. How many one-night stands? None.
34. What was your favorite TV program? True Blood, NCIS.
35. Do you hate anyone now that you didn't hate this time last year? I stopped being friends with someone over something stupid and I don't think as highly of her any longer; but no, no hate.
36. What was the best book you read? The Sookie Stackhouse books

37. What was your greatest musical discovery? The Glee Soundtrack

38. What did you want and get? A blog.
39. What was your favorite film of this year? Trucker, mentioned here


40. What did you do on your birthday, and how old were you? I turned 24 and I celebrated at The Melting Pot with my friends.
41. What would have made your year immeasurably more satisfying? Finding less family skeletons, fighting less with Jon.
42. How would you describe your personal fashion concept in 2009? Jeans, sweaters, denim skirts. I've been a blond for most of this year. And my Crocs Santa Cruz Slip-ons

, mentioned here.
43. What kept you sane? Books, blogging, card-making, texting.
44. Which celebrity/public figure did you fancy the most? John Krasinski.
45. What concerts/shows did you go to? Toby Keith, The Get Up Kids.
46. Did you see any live sporting events? I went to a Kings game.


47. What political issue stirred you the most? UGH, SARAH PALIN.
48. What has been your favorite moment? The quiet ones spent with my mew.
49. What was your best month? June.
50. Who was the best new person you met? Erica.
51. Who has been your best drinking buddy? I don't think I drank at all this year.


52. Who did you miss? Amy, Natalie, Toni.
53. Favorite night out? No idea. Maybe
54. Tell us a valuable life lesson you learned in 2009: Your origin family sets up your worldview, so try not to mess up your kids too badly.
55. What's something you learned about yourself? I am important.
56. Quote a song lyric that sums up your year:

"Something has changed within me
Something is not the same
I'm through with playing by the rules
Of someone else's game."

Have a safe and happy New Year!
{And don't forget about the giveaway!}
Posted at 11:57 PM