A Tale of Two Grandmas: Part One 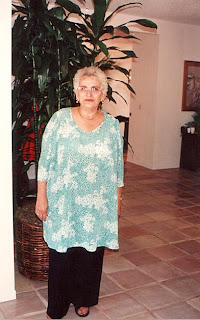 When I was 13 or 14, I went through a phase where I woke up every morning around 4am. No one else in my house was awake and though sometimes I would read, I would usually watch TV. Reruns of Small Wonder (the '80s show about the robot daughter?), Charles in Charge and Out of This World were the usual fare.

My grandma Edie also used to wake up early and it had come up that she would watch these same shows occasionally. Sometimes, I would call her and whisper about what was happening on the show we were both watching. It was nice to feel a connection with somebody - 4 am can be a very lonely time, even in a house full of people.

Edie was good at connections. She was the cake-baking, gift-giving, movie-watching, pool-splashing grandma. She was affectionate and talkative and interested. Every once in a while, I will taste something and be transported back to Grandma's house. A Christmas cookie, a chocolate cake, eggs and toast made a certain way. Once, at a garage sale, I glimpsed a sliver of aqua patterned dishes and was back in her red and black kitchen.

You know those magnets that say, "Only left handed people are in their right minds"? She had one on her fridge. Reader's Digest? On the bar. She got me a subscription 6 months before she died and its arrival every month was like a reminder that my reading partner was gone. She had light blue leather couches and a glass coffee table that probably induced panic attacks in my mother whenever we were near it. She decorated seasonally - eggs, chicks and bunnies for Easter; ice-skating snowmen, polar bears with Cokes and handmade ornaments for Christmas.

Grandma Edie had a waterbed that my sister and I used as a bouncehouse. She had gold satin sheets on said bed, which lended themselves nicely to games of princess and house and spaceship. Her mirrored closet doors took up an entire wall and were angled perfectly so that Grandma could see us even from the living room. Looking back, it's clear that we had no perception of privacy - I remember rummaging through her nightstand and jewelry armoire looking for whatever I could use to dress up. 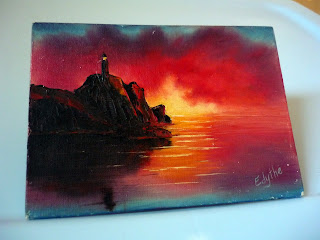 My favorite parts of Grandma's house were the glass cases filled with china, glass, and porcelain. I always liked what I called "soap and water cleaning" as opposed to vacuuming or straightening. So, when I came over, Grandma would have paper towels, newspaper and windex ready for me and I would go to town. She had these porcelain dolls that were each associated with a season. i made up stories about them and gave them biographies and personalities.

She had an Avon room, with a big dresser filled with all the goodies she had ordered. We were allowed to look through all the gold and black boxes and find things we liked. The Avon room had Grandpa's hospital bed in it - basically a rollercoaster for little girls. That bed always had layers and layers of afghans on it - it was like a tactile technicolor explosion.

Next to the Avon room was the craft room - in a previous time, this was Scottie's room (Scottie being my great-grandmother, Edie's mother). Since Scottie had died, the room had been taken over by my grandma's creativity. There was a craft table in the middle where she made these little sculptures. Maybe it was like sculpey, because she would bake them and then paint them. There were little bears and bunnies and cats. Oh, but the caterpillars were my favorite! They could be green or purple or wearing Santa hats. Along the walls were bins of yarn and glue, glitter and clay, paint and canvas. Because yes, she painted, too! 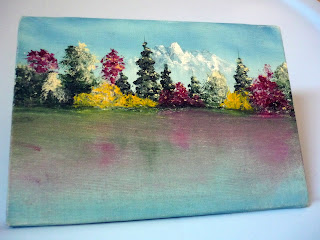 My best friend, Amy, got to know my grandmother when she accompanied us on weekend visits. They were both creative, funny, and smart and they were fond of each other. Once, Amy and I noticed that Edie's car was filthy - she hadn't driven it lately and she couldn't wash it herself. So we did! We dug through my Grandpa's old shed and found ancient soap and some rags and we spent a really lovely afternoon cleaning that car.

When I was 16, she was given the opportunity to have a dangerous operation or to live with a condition that may have taken her life at any moment. She decided that living her life in fear that it might end was not the right choice for her, so she opted for the surgery. She survived, but died of complications shortly thereafter. I was told early in the morning and opted to go to school. Amy was the first person I told and I remember we had a late start that day (school didn't start until 8:50am), so we went to Ihop. That Ihop is now a bank, something that makes me happy and sad at the same time.

Grandmas are very important figures in the lives of little girls. Mine taught me that one woman can give up a child for adoption, love the same man for 30 years and bury him 14 years too early, work in a factory, write secret poetry and escape a hard life for a better one. She taught me that women can do anything- that I could do anything.
Posted at 5:17 AM

Email ThisBlogThis!Share to TwitterShare to FacebookShare to Pinterest
Labels: Grandmas