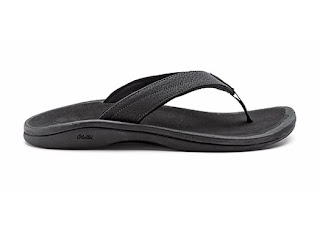 I love me some flip-flops. I used to pack them in my backpack in high school and after my dad drove away, I would take off my tennis shoes and put on my sandals. I'm super cheap and for years, lived only on Old Navy 2 for $5 flip-flops.
But recently, my high arches and (ugh) pronation has caused me to cut back on flip-flop wearing, one of the reasons I was so happy to find my Crocs Santa Cruz (mentioned here). BUT, while in Hawaii in April, I was perusing a dive shop while my friends signed up for scuba lessons (not my thing) and I tried on the most scrumptious pair of sandals EVER. They were the Olukai 'Ohanas. And I was in lust.
They have a hiiiiiigh arch that cradles my foot and a wide band across the top to ensure they don't go flying off when crossing busy intersections (yes, that's happened). They come in black/black, black/red, brown/brown and brown/cream. But they were $105! I have never even bought jeans for more than $30, so that about blew my mind. So, I passed on them, but gazed at them longingly as I slowly backed out of the store.
Not even two weeks later, when I was back at home, my boyfriend mentioned he wanted some flip-flops of his own. I suggested Old Navy's 2 for $5 options and he was not impressed. I said, "FINE. Let's go down to Becker Surfboards in Hermosa Beach and we'll look there." So we went, and we looked and he found a great pair that he loved. I was wandering and ended up in the women's shoe section, and lo and behold, directly in front of me were the most comfortable shoes I'd ever tried on. I may have made some sort of noise, because my boyfriend was soon next to me asking if I was okay. "Those, those are the shoes I told you about when I was in Hawaii in the dive shop and I couldn't get them and they're sooooo perfect."
Being the lovely person he is, the BF offered to get them for me as an early anniversary present. I demurred at the suggestion and told him that even though $65 was waaaaaay cheaper than $105, I had to decline because well, that's just crazy. But then, he made he sit down, and then I tried them on and then I gave in. I tried to wear them out of the store, but he said I had to wait. :(
Since they were presented to me though, I have worn them constantly. They also have gone to Ojai and to Catalina Island and on my everyday travels with me. I have washed them in cold water with mild soap and they turned out beautifully. In an average week, I probably wear these 4 days and my Crocs Santa Cruz Slip-ons 3 days.
Posted at 10:26 AM